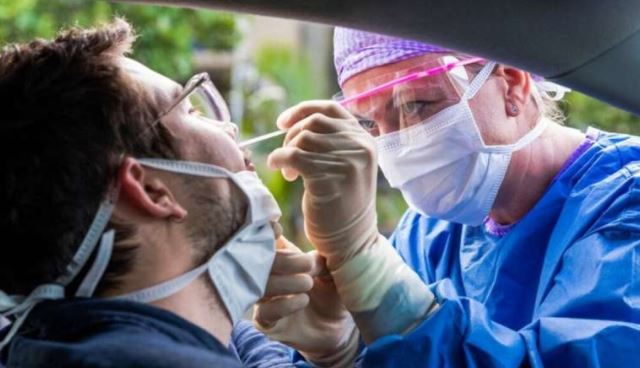 For now, make no mistake, this is Eugenics in Hyper-drive. For hidden randomly in batches of vaccines was Graphene oxide, a toxic payload which will in most circumstances prove fatal. Exposure to this substance produces all the symptoms of Covid, It is also been reported in nasal swabs, masks and other items. The people were catching Covid symptoms from the very masks that they were wearing to protect them. This was then to be amplified with nasal swabs and finally made terminal with the vaccine.

Rob Watson is a self taught researcher in Australia. He worked as a professional photographer, later as an imaging consultant. advising many government clients. His take-away on the Covid crisis is that unfortunately a great many will die as a result of humanity putting their trust in governments. The multitude of people that will be lost, will be explained as other variants of Covid when the real cause is the interaction of nano particles with Electro-magnetic poisoning.

Many actors have been used to promote the Covid Virus story. They came from the ranks of the media, from the senior ranks medicine and the hallowed halls of politics. They thought had been given a unique chance to make in killing in the Big Pharma/Financial markets if they followed the script that was presented to them, that of fixing the seasonal flu.

However this was only part of the story, for behind this scenario was a darker agenda. I do not believe that they would have signed up to the project if they knew that they themselves and their families would form part of the Covid casualties.

Unknown by them, they were destined to become expendable in the larger scheme of Depopulation. They had been asked to convince their respective populations that a wholly new pathogen was causing a pandemic. This pathogen was of course a seasonal outbreak of influenza. This was not easily identified as the software that separate’s all genetic codes had been corrupted and was now reporting a novel virus.

Some trust and do not question the technology. The “Novel” part of the pandemic had now been proven to be false. Researchers have stated that isolates supplied from the CDC supposed to contain Covid, contained only, Influenza A or B.

This has been proven by many high end research facilities. COVID is really a tale of endless lies, false data sets, corrupted details as to the real cause of an individual’s death, medical mismanagement and deliberate eugenics of the critically ill. Fear was to maximize vaccine uptake and thus to achieve a financial killing.

I believe this was the game plan that most of the actors signed up for but now they are caught in deep mess of political assassinations of world leaders who refused to play any part in the scam and the duress of academics, doctors, researchers who collectively fear for their careers, livelihoods and families.

For now, make no mistake, this is Eugenics in Hyper-drive. For hidden randomly in batches of vaccines was Graphene oxide, a toxic payload which will in most circumstances prove fatal. Exposure to this substance produces all the symptoms of Covid, It is also been reported in nasal swabs, masks and other items. The people were catching Covid symptoms from the very masks that they were wearing to protect them. This was then to be amplified with nasal swabs and finally made terminal with the vaccine.

Then, its toxicity in humans was about to get more complex.

The Nano integration of these two substances, form a matrix which I can only describe as Nano Sandpaper. Imagine a piece of sandpaper hurtling through your veins. Excoriating the vascular surfaces and damaging blood cells allowing them to lose ferritin particles from each affected cell.

The loss of ferritin, effects the zeta potential of each RBC causing them to agglomerate (ie Form Clots), and depending where the clots formed, different effects would occur. Background; Zeta potential of healthy RBCs is the magnetic arrangement of ferritin particles within each RBC it is essential for the transport of oxygen within the body, it also prevents them bonding together by a brilliant arrangement where each ferritin particle presents a like charge to the cells surface effectively turning each healthy RBC into a ring magnet Thus each RBC does repels each other cell. Clotting can occur when many blood cells are damaged and lose their Zeta potential.

This is exactly what researchers are discovering. COVID will be used as the ruse to start WW3 – if we let it This will, in rather short time be blamed upon the CCP.

When to true merchants of death reside upstream and in other places. The blaming of China is in part to insure that the next phase of the project WW3. Most Chinese are not the enemy. They are our trading partners, our current and future friends.

Only the corrupt and greedy servants of Zion are humanities enemies. And beware, some of these servants are closer than you can imagine.

One thought on “Like Jonestown, Covid is Simply a Mass Poisoning Event”